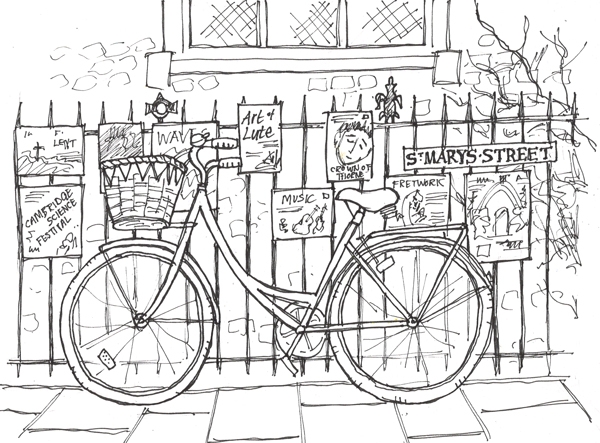 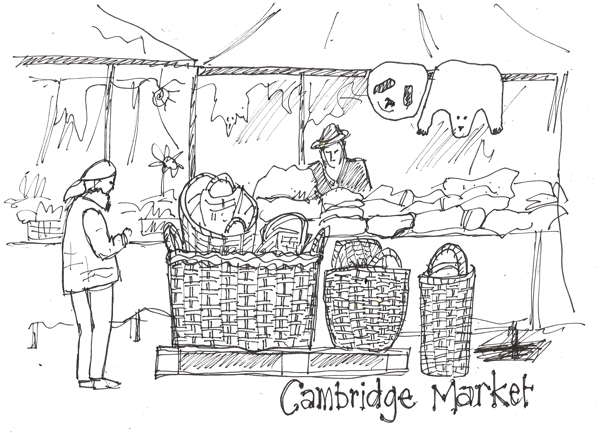 What is it about sketchers?

On Sunday 23 February the Cambridge Urban Sketchers met up outside Paperchase to make drawings of the Market area. It was a big turnout of perhaps 30 people and yet the wind was blowing and it was very cold.

I didn't have to walk far until I found my spot. I unfolded my stool and plonked it down outside the Cambridge University Bookshop, because that was opposite where I had left my bike. Call me weird but I love my bike and I love drawing it against the railings and posters, well anywhere. This time I was able to draw a bit of St Mary's Church window too and the street sign.

It was half term week but not particularly busy, a few people stopped to take a photo and say 'great picture' and then I was suddenly aware of the colour red. Floating past were the Extinction Rebellion red robed ladies with their white faces. I am never too sure whether they are scary or beautiful but they are certainly arresting. Suddenly the drums began and XR were there after a week of protests in Cambridge which closed a road and included digging up the front lawn of Trinity College.

I completed my sketch and cold from sitting in the wind I moved closer to the market. A cup of Earl Gray from one of the stalls and I joined another sketcher on a bench and made my second sketch. I am still reeling from the fake panda and polar bear rugs slung over the metalwork that forms the basis of a stall. At least I think they were fake.

So after two hours in the cold with a wind that kept blowing my sketchbook pages around and got through my coat I made a detour into the Grand Arcade to warm up until meet-up time where we share our sketchbooks. And then it was the bike home. I swear the wind was against me on the way in and again on the way home but I was happy, battered and at last warm.