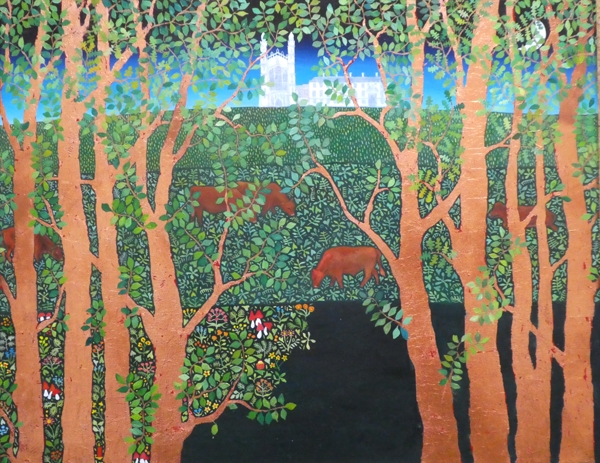 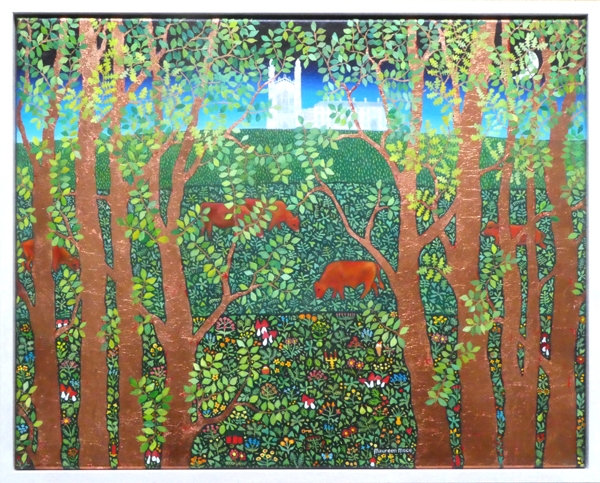 Many hours have passed since the last photos. I had this painting set up during Cambridge Open Studios so visitors could see how I worked. At quiet moments I managed to add to the painting.

The painting was completed in a very quick time of around 8 weeks. I often work on two paintings at the same period because the paint takes such a long time to dry.

Sometime during the process I decided to add cows. Some time ago there were 3 cows in the area behind Kings, a British White cow, her daughter and granddaughter. These days there are some lovely red polls which are there to keep the grass in trim. 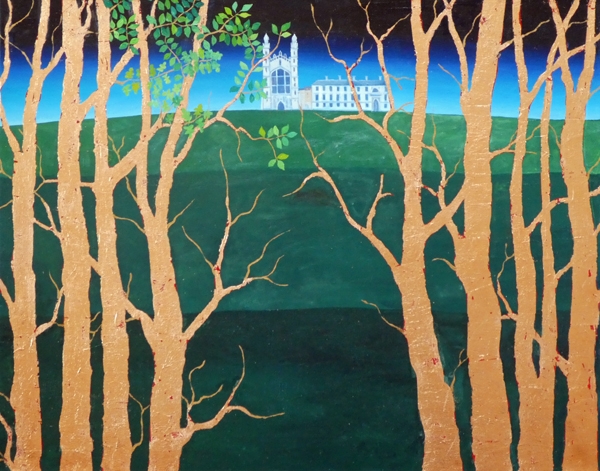 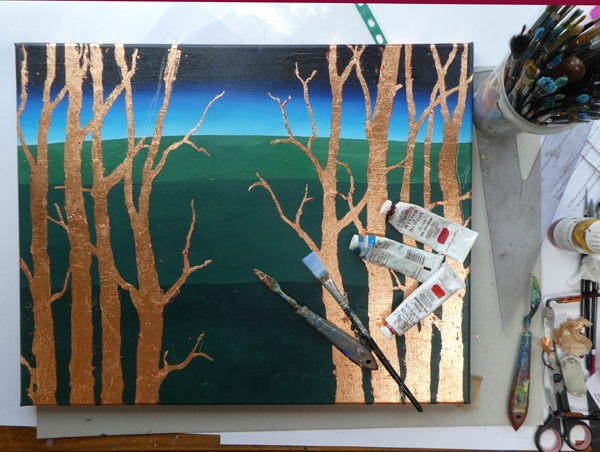 The trees are now covered in copper leaf. I add the copper very roughly so touches of the red paint show through, this gives them the texture of bark. Adding the leaves is a pretty laborious job so I turn on the computer and tune into BBC iplayer to listen to the dramas while I work. Adding the leaves will take several days and I may add several layers.

In the second photo you can see my paints. I always use a tear-off palette which I can discard after use - anything to save extra work! 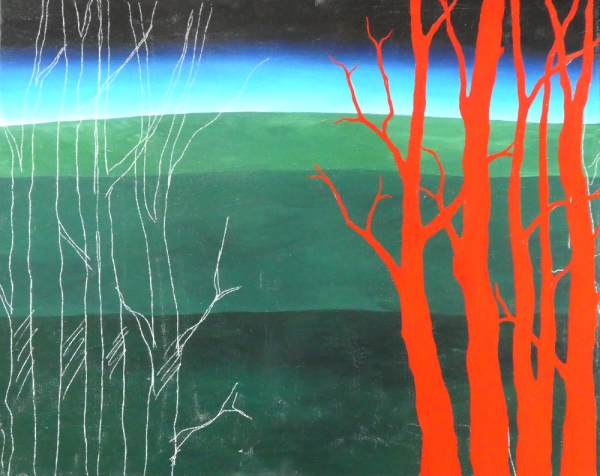 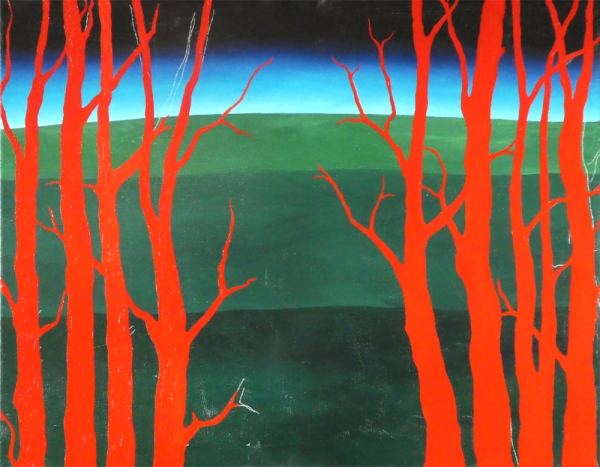 My paintings consist of several layers.

Before I got to this stage I have added an extra coat of acrylic primer to the canvas and an undercoat in acrylic paint to outline the main shapes in the painting. I have over-painted the layers of green and made a sky change from light to dark in oil paint. Each colour will take around a week to dry.

My idea for the painting is the 3 levels of grass leading down from Kings College to the Backs, one of the most famous views in Cambridge. You will be able to see a small King's College Chapel between the row of trees.

These two images show how I outline the design of the trees in white before painting them a solid red in oil paint underneath where I shall place the copper leaf. 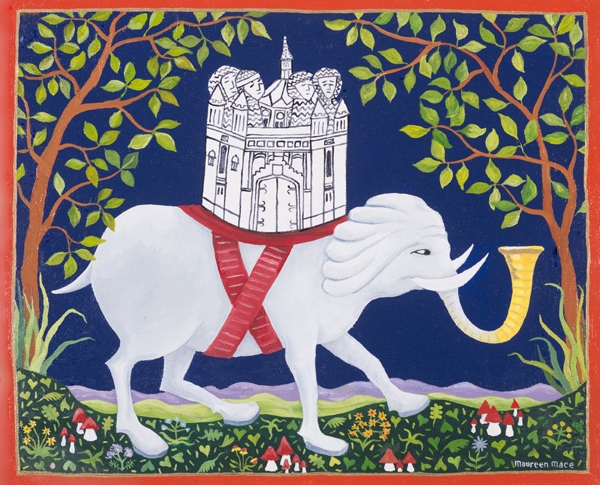 Everyone loves elephants or at least are intrigued by them. They are ungainly, huge, have peculiar noses and are frightened of mice.

Way back before people took holidays abroad, explorers used to send back descriptions of these amazing animals. Initially they thought elephants lacked knees which meant if they fell over they were doomed as they struggled to get upright. For a very long time only a very few people in Europe had ever seen one but word got back that they were so huge they could carry castles on their backs yet they were afraid of mice.

My painting is based on a description from the thirteenth century and the huge creature has King's College Gatehouse, part of the University of Cambridge, on its back along with a few lost crusaders. Imagination is a beautiful thing. 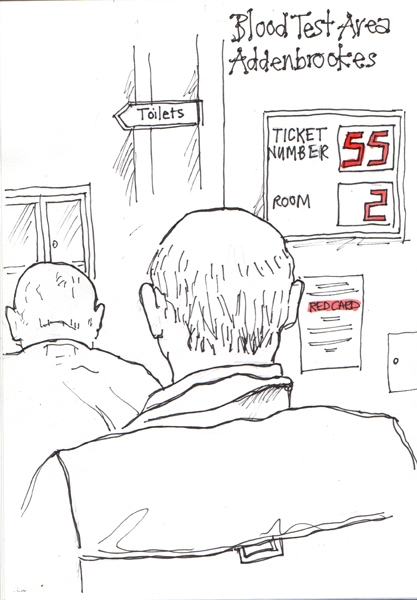 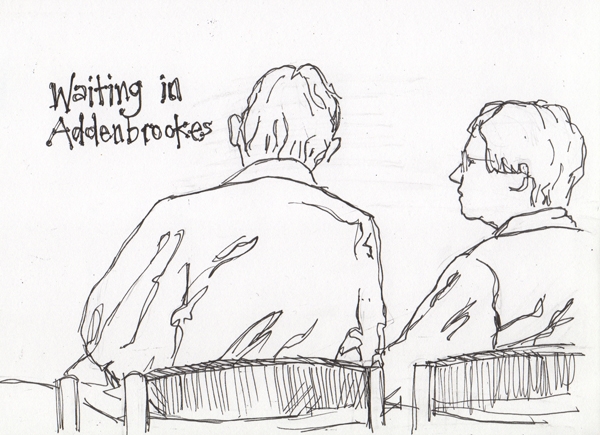 I don't particularly like visiting hospital as it means either I or someone I know needs some tests or is ill.

Waiting can take a time in the various departments but this means you stay in one place for a time, maybe for 5 minutes or maybe up to an hour. So I take along my sketchbook, a propelling pencil, an eraser and some black fine liners. I don't think the hospital would appreciate me with watercolours so they stay at home, the red marks were added at home.

The two sketches above were done quickly. The first waiting with a friend who needed a blood test and the second waiting for an appointment to see the doctor.

In the basement at Byard Art 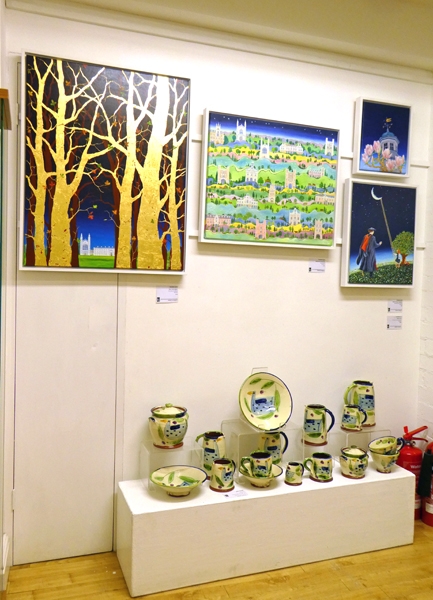 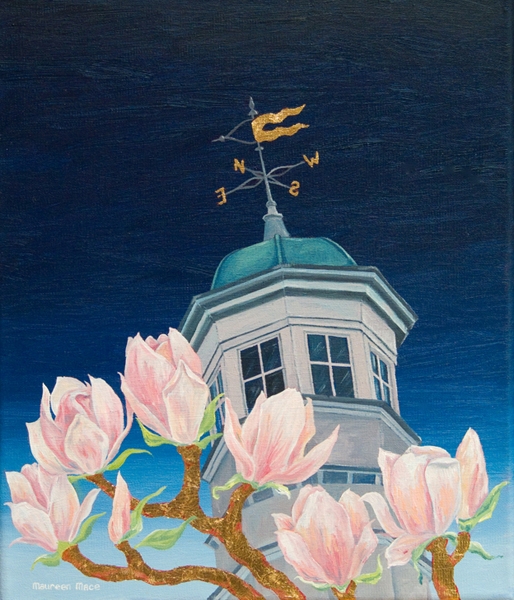 July is over and so are the Cambridge Open Studios. Although it was really hot most of the weekends I would like to thank everyone for visiting. It is really lovely to meet people who have seen my work in the guide and come along to look at the work and to chat. I find this very flattering especially I am not in the centre of Cambridge. This year several people came along who had seen my work at Byard Art on Kings Parade in Cambridge, others told me they wanted to see more after liking my paintings at the Cambridge Drawing Society.

August means lots of visitors to the city centre and a lot of locals keep away for the holiday season. If you do venture into the city I have 4 paintings at Byard Art which are grouped together in the basement.

I the meantime I am frantically painting for forthcoming exhibitions.