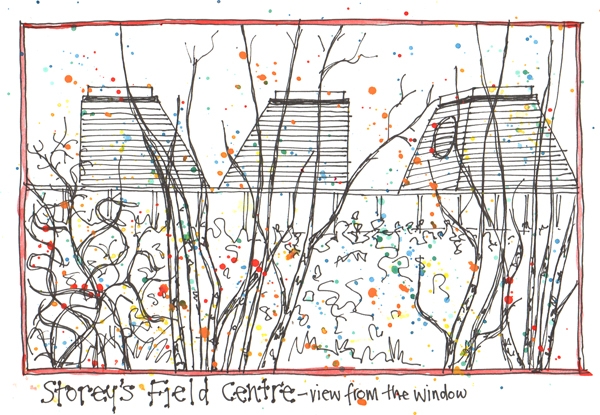 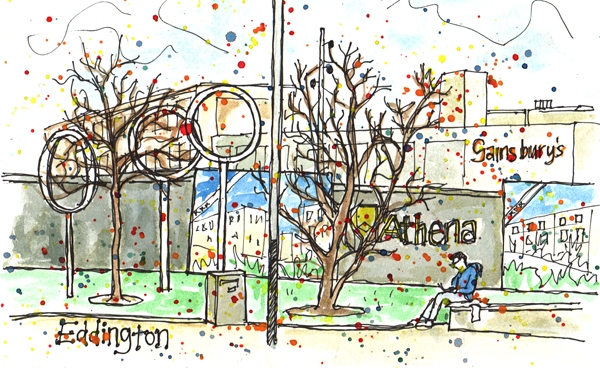 On Saturday the Cambridge Urban Sketchers visited Eddington, the newest suburb of Cambridge and still in the process of being built.

To say it was windy was an understatement! Having biked there from North Cambridge with wind gusts of over 46 miles an hour straight into me, it was a slower journey than normal. The new open roads at Eddington seemed to swirl this wind round even more making it very difficult to hold on to my sketchbook as the pages flapped around and using paint would have been impossible.

I had two choices if I wanted to be out of the wind: to sit and draw in Sainsbury's or to sit at draw in the Storey's Field Centre. I found the later much more comfortable with its large comfy black chairs and several of us ended up there. But what to draw? I found the whole area rather dull and lacking in colour so I ended up drawing the view from both the windows.

I do prefer the old buildings in the centre of Cambridge but was pleased to be given a chance to draw there. I expect the whole place will look a bit better when the trees have grown but I shall just remember the awful greyness and that biting wind.

On a more positive note, it was a lovely cycle ride home with the wind behind me.