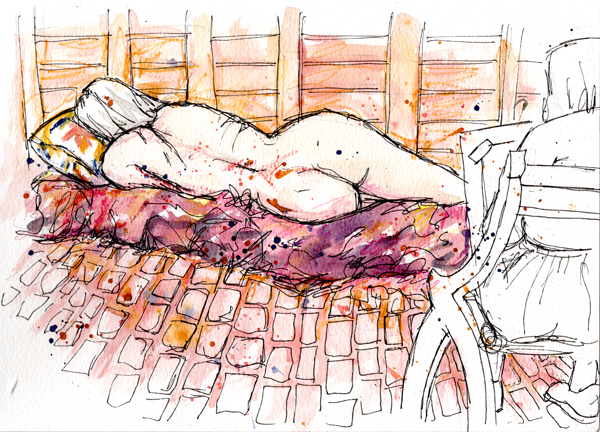 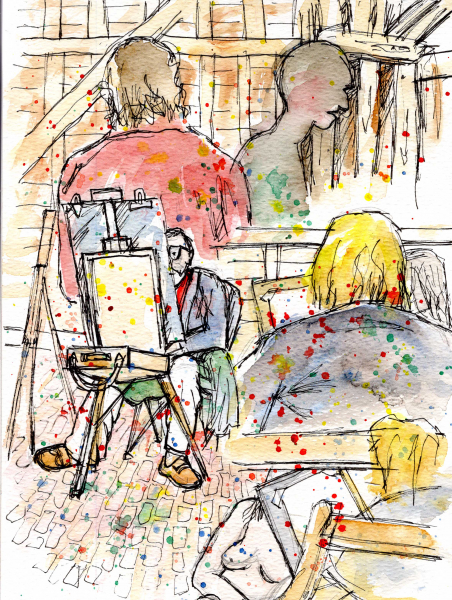 I was delighted to be invited to some life drawing sessions at the beautiful old Tithe Barn in Landbeach.

The group and venue is new but unfortunately, I could not attend in July as I always seemed to be putting up my paintings either at the Pitt Building or at my home on Friday mornings ready for Cambridge Open Studios so I was really pleased they extended the sessions to take place in August. My main problem was transport. The venue is 3 miles north of Cambridge but I share a car with my daughter who lives close by and her shifts with the ambulance service coincided with the classes. Her work comes first as she has to take spare clothes, helmet, emergency equipment etc which she can't get on a bike. I contemplated going on my bike via Mere Way as the A10 is far too dangerous to cycle but with rain forecast and a strong wind I gave up that idea and decided to catch a bus. All worked well except the walk in the rain from the bus stop to the barn took 25 minutes so I arrived wet and late.

The last life drawing session I had been to was 25 years ago when they were held at Kings College. Sessions were always a bit crowded so it was lovely to see the space in the Tithe Barn. The door was left open so we could see and hear the cows in the big landscape outside.

I opened my sketchbook and began to draw. The model was brilliant, very professional with good poses and, I found out during the break, a great cake maker.

When I looked at my drawings later, I realised I had made a series of urban sketches! I was as interested in the surrounding as I was the people as you can see in the drawings above.

I had a wonderful morning and met some new people and got a lift home. I am already looking forward to next Friday and hope I can get there on the bike as long as it is dry and not too windy.